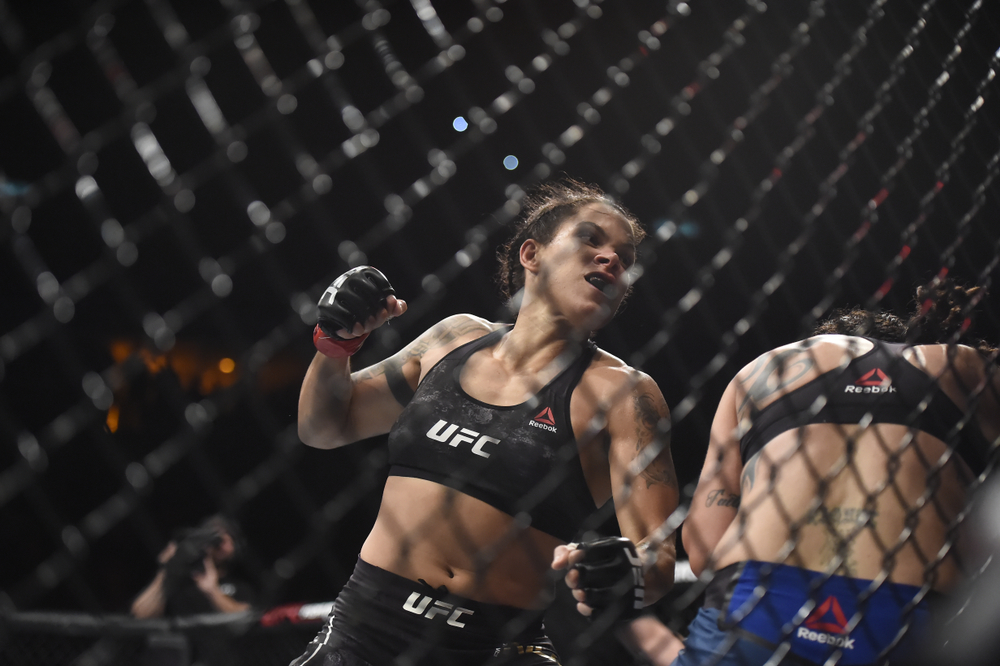 Reading Time: 3 Min
Image: Shutterstock
The upcoming UFC 250 on Saturday will give Amanda Nunes the chance to defend her title and make history. If Nunes comes out on top, she will be the first female UFC champion to defend a title in two different weight classes.

It appears that the odds are on her side as MMA insiders give her the upper hand.

Nunes is on the course of making history with her upcoming fight. She is slated to join the ranks of some of the best fighters to ever step in the octagon. If her defense is successful, she will be the third, and only woman, to ever defend a title in two weight classes.

Despite being the heavy favorite, Nunes is facing a tough fight. Felicia Spencer is a tough fighter with an almost unblemished record of 8-1. It is important to note here that her only loss came via decision against Cris Cyborg, making her one of the few women to survive and finish a bout.

Coming to UFC 250, Nunes as the champion is an obvious favorite. Top bet shops place her at a -650 favorite, this means that to win $100 one has to bet $650. That is a huge margin, but the odds are fairly in her favor.

As for Spencer, she currently stands at a +450 underdog. Though the risks is relatively high, the payoff is great. A bet of $100 for her will net $450. These odds are not final, and there might be some relatively small change as the fight nears.

Many MMA analysts are confident that Nunes will be able to win the bout. She does have the experience advantage and by far the more aggressive of the two. She is stepping into the octagon with a record of 19-4, and the Women Featherweight title on her belt.

As for Spencer, those behind her believe that she has a legitimate shot for an upset. After all, not many fighters have the skill and tenacity to successfully defend two weight class titles.

Many analysts suggests that fighting Nunes on equal footing and constant pressure should be enough for Spencer to steal the crown. Nunes is known as a heavy hitter and a pressure fighter, being on par with these attributes will make Spencer’s case.

If there is one weakness for Nunes, it is her rather sloppy takedown attempts. Spencer can capitalize on his and deliver a heavy blow once Nunes makes a mistake when attempting a takedown.

Facing Nunes straight up is not a viable option for Spencer if she wants to pull off one of UFC’s greatest upsets. However, becoming aggressive and on the lookout for a takedown opportunity is a great strategy for Spencer. One of her opponent’s weaknesses is when she is fighting with her back on the canvas.

UFC 250 will also have a fairly loaded undercard with Raphael Assuncao and Cody Garbrandt co-headlining the main cards.